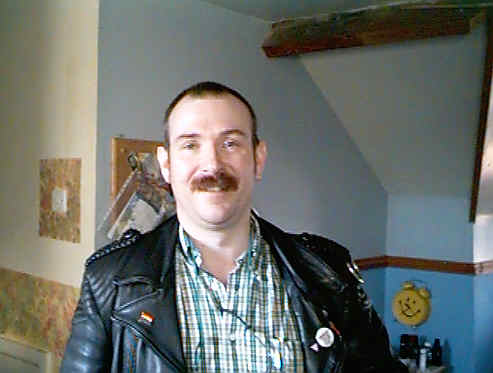 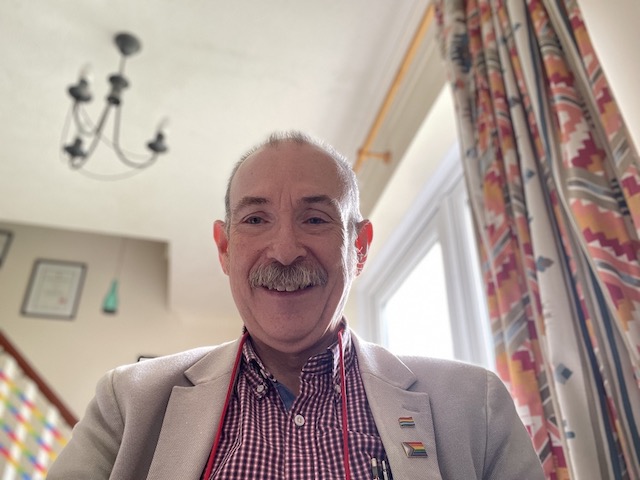 Until the 4th May 2003, I was a computer programmer working for a well-known company in Reading (Yell Ltd, formerly BT's Yellow Pages). I'd worked in IT since I graduated in 1979 with an honours Computer Science Degree from Wolverhampton Polytechnic. I used mainly PL/SQL, SQL+ and VAX Basic, but have used PowerBuilder. The last thing I got involved with was a rather quirky system running on an HP running UniVerse (under Unix) and written mainly in UniVerse Basic. I moved down here from the Midlands in November 1996 when my old department was merged into Yellow Pages after they bought out ITT World Directories (UK), the company I joined in 1987. It's a move I regretted as six months later I split up with my partner and six months after that my Mum died (23rd December 1997). I then spent some time as a humble bus driver, having taken my PCV licence in September 2003. I achieved qualification to NVQ level 2. I am currently retired.

I was born in the City of Wolverhampton in the mid 1950s in a small nursing home in Riley Crescent, Penn Fields. This is within the boundary of the 9 hides of land granted to Lady Wulfrun back in 984, thus I am a Wulfrunian.
School was Springdale County Infants School, then Springdale County Primary School and then finally St Chad's College (a grammar school). I spent a year at Wulfrun College of Further Education in Paget Road and then went to London University (Queen Elizabeth College) where I read biochemistry. At the end of my first year, I discovered computers and that changed my direction of study. I left after the first year and went to The Polytechnic, Wolverhampton, where I read Computer Science and got a lower second honours degree.

I used to have a BMW K100RS motorcycle, which I had to send for scrap on the 19th June 2003. I'd had bikes since 1975 - I passed my test in 1976. I used to be an instructor (and later on an examiner) for the RAC/ACU Training Scheme and Proficiency Certificate.

I'm currently single (but open to offers as it's not by choice and it's rather a long story, plus I hate living alone).
The full "long story" can be read by clicking on the words highlighted in orange above.

I am interested in photography, the theatre, transport, cinema, motorcycling and reading. I also hold a Radio Amateur licence (for which I had to take a City & Guilds exam and a Morse Code test) and for anybody interested my callsign is G4ORX (it still is if you're not interested), however I haven't been active in the hobby for quite some time. I also like going to museums, especially the "living" museums, my favourite is the Black Country museum - I have connections with two exhibits. The canal bridge (when it was in Wolverhampton) was where I had my first car accident and I helped restore one of the vehicles, a Wolverhampton Trolleybus, when I was at school (St Chad's College 1966-1973). My main contribution to its restoration was to remove the nicotine stains from the upper deck ceiling. I re-joined the Transport Group at the Black Country Museum (it used to be the Wolverhampton Trolleybus Group 30 years before when I was first involved) in early 2000 and started to work as a conductor on the occasional Sunday. Once I'd worked at the museum as a volunteer on quite a few weekends (I go about once a month and usually the bank holidays as well), I finally got to drive it. It was worth the 30 year wait and then in summer 2002, I passed the museum's test and was able to drive visitors round the site. I also qualified to drive the tram there. After a brief period when operations had to be suspended due to theft of parts of the overhead I received a letter to tell me I'd be contacted when operation resumed. That was the last I ever heard. 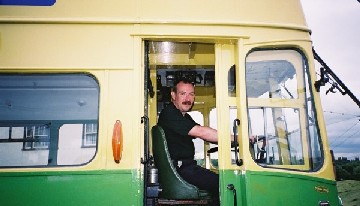 Me in June 2002, driving my favourite trolleybus


I have a wide taste in music, including Genesis, the Eagles, Erasure, George Michael, Queen, Led Zeppelin, Marillion, Yes, Bronski Beat, Jimmy Sommerville, Diana Ross, Shania Twain, Steps, Abba, Edith Piaf, Dusty Springfield, Pet Shop Boys etc. I loved Hi NRG and also the stuff produced by SAW - but wouldn't buy it. I also like a lot of classical music, but have to confess to knowing little about it. I'm also very fond of the Gilbert & Sullivan Comic Operettas, especially "Trial by Jury", "The Mikado" and "The Gondoliers".

My favourite film is "Brief Encounter". However if I feel depressed I always put on "Victor/Victoria". I also like the Ealing comedies (especially "Passport to Pimlico" and "Kind Hearts & Coronets"). My other favourite films include "The Last of The Blonde Bombshells", "The Birdcage", "Wizard of Oz", "The Adventures of Priscilla Queen of the Desert", "Prick up Your Ears", "Little Voice", "Casablanca" and "Torch Song Trilogy".

I like typical Black Country food such as "Faggots & Pays" (that's Faggots and Mushy Peas) but also like a wide range of things - I'm not a fussy eater. I like eating out, but don't really like doing that alone. I'm quite fond of Chinese food and can use chopsticks (I'm actually quite good at it). One of my favourite foods, though, is Houmus - especially with hot pitta bread.

I'm mainly a coffee drinker, but did eventually get a taste for tea. I love red wine and like my white wine very dry. I have a particular fondness for vintage port (especially with a good Stilton). As for beers, my favourite is either the Dark Mild from the Old Swan in Netherton or Banks's Mild. I also like chilled Belgian or German beers (but not the versions brewed under licence in the UK).

Having mentioned the Old Swan at Netherton, I have to say they do some right bostin fittle there (that's Black Country for they do very good food there). I can thoroughly recommend it. 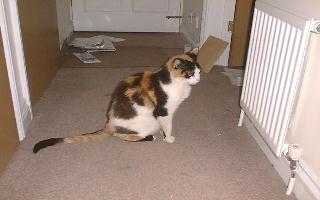 This is Polly, she was 18 or 19 (which was very old for a cat) when she died on the 26th April 2000 and really belonged to my ex-boyfriend, but she was too old to move, so I ended up with her. She was very healthy until Christmas 1999 and tended to have a mad half hour most days. She became ill quite quickly in the new year and by mid April 2000 had lost fur and became incontinent. She had failing kidneys and a tumour and had started to lose weight quite dramatically. I felt really guilty, but it had become impossible to let her inside and she was deteriorating very quickly. The above photograph was taken in August 1999.
I used to also have a tabby (who I inherited off a lodger), but he disappeared in July 1998.


Have a look at my Gallery


Read My Coming Out Story


Back to main page