A History of the Birmingham System

It is sometimes forgotten that there were three trolleybus systems in the West Midlands. Walsall and Wolverhampton had extensive systems and there are two vehicles running at the Black Country Museum as a reminder, but nothing whatsoever survives of the first system in the Midlands - Birmingham.

Birmingham was unique in many ways, it was the first system to replace a tram route with trolleybuses and the first to abandon after the war. It also was the only post-war system where the trams outlived the trolleybuses (while it is claimed to be the only system to do this, Aberdare's Cedes-Stoll trolleybuses ceased in 1925, 10 years before their last tram, and the tramways were actually extended over two former trolleybus routes as a final twist). Birmingham also retained the trolleywheel collectors while all the other post-war systems changed to the carbon insert. They did try them, but the manager objected to the marks left by the wet carbon that drops off the trolley heads in wet weather and were very noticeable on the cream paintwork. Incidentally, Walsall's General Manager, R. Edgeley Cox, solved this problem by having the trolleybooms mounted further back, so the deposits dropped onto the street behind the bus. 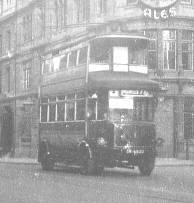 The first route was the Nechells tram route. The track was in very poor repair and the cost of relaying it for what was then a rather low used service was considered too much. The service was officially an experiment, but as the tracks were taken up before the service started, there was no intention to go back to trams. Birmingham was strange in that the motorbus routes were all numbered starting again from 1, thus duplicating the numbers of the tram routes. The Nechells route stayed numbered as 7. No wiring was ever put up to the depot and the buses travelled to and from Washwood Heath using the tramway overhead and a trailing skate in the track. The buses were re-poled onto a short stretch of wiring where there were no tracks and then again onto the proper service wires - there was no overhead pointwork (or frogs as they are usually called) on the Nechells route. Trams from Washwood Heath used bow collectors and so, even if it were possible at that time, it would have been too expensive to put up suitable wiring to the depot. The original vehicles were tall and narrow like the city's trams and had hand controllers. They were popular with the passengers as the usage of the route increased by 50%. The fleet was expanded with various demonstrators (none of which lasted very long) and the only trolleybus ever built by the EMB company of West Bromwich, this only lasted 2 years before being returned to EMB and then was quietly broken up, followed by 4 vehicles similar to the original Railless. The last of these had a foot controller, which was rather strange as it was a replacement for a vehicle shown at a commercial exhibition that was rejected for having a foot controller. 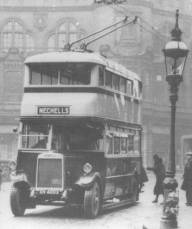 When the Railless buses were due for replacement (they had remained fitted with solid tyres throughout), Birmingham bought Leyland trolleybuses (TBD1) which were based on the TD1 motorbus. The bodies fitted to these was the same as the motor buses, even including a dummy radiator in front of the electrical equipment. These vehicles looked just like a motorbus with poles on the roof. Unfortunately, the first one failed the tilt test and so the destination blind winding equipment and the headlights were removed and the seating capacity upstairs was reduced by one. Paper stickers were stuck on the inside of the destination display. The one pictured here has the paper sticker reading "NECHELLS" rather than the blind (which read "NECHELLS 7"), but has had the headlamps restored. They were followed by Leyland 6-wheelers as Birmingham wanted to try out large capacity trolleybuses with a view to perhaps further conversions.
In 1934, the Coventry Road tramway was replaced by trolleybuses, using high capacity 6 wheelers. The decision had been taken two years

earlier, but within weeks the Conference of Rail and Road Transport chaired by Sir Arthur Salter was set up by the Chancellor and came up with a proposal to increase the licence duty on trolleybuses from £96 to £554. This meant the conversion was put on hold and when the Budget of 1933 made no mention of the recommendations of the Salter Committee, the conversion finally went ahead with 50 6 wheel Leylands. Some 4 wheelers were also purchased later (for the Lode Lane extension). The route was extended twice, once to serve the expanding suburbs and then again to the Lode Lane Rover works. This latter extension was done in the first years of the war and was a branch of the main route. As there were two different termini at the city end there were several variants and 10 different route numbers were used. The buses had the typical "Birmingham" look, with the cobalt blue and cream livery and the two mouldings between the upper and lower deck windows to carry the two cobalt blue bands.

In 1937, West Bromwich Corporation, who were due to take over the section of tramway on the Dudley and Wednesbury routes on expiry of the lease on the section of the track in the borough, proposed trolleybuses. They got as far as rebuilding Oak Lane garage to be trolleybus garage, but before they could order the vehicles and put up the depot wiring, Birmingham refused to allow any trolleybuses to enter the city on that route. West Bromwich reluctantly acceded to their demands and the joint operation commenced in 1939 using motor buses. The anti-trolleybus lobby had finally stamped their mark.

The end of the Nechells route came in 1940. As the skate used for depot journeys caused flashes, it fell foul of the blackout regulations and the vehicles were put in storage, with a temporary bus service to cover. Unfortunately, due to wartime shortages, the wires were removed, bit by bit, to make good damaged overhead elsewhere and by the end of the war it had been decided that the trams and trolleybuses were to go. The end came in 1951, with no public ceremony and two years before the last trams. In their coverage of the event, the Birmingham Evening Post claimed that Birmingham was the first municipality to operate trolleybuses, which it most certainly wasn't, this having actually been Leeds closely followed by Bradford some eleven years before Birmingham. As the replacement buses were smaller and slower (and noisier), this wasn't very popular with the passengers. Some stops had to be removed as trolleybuses, with their superior acceleration, could easily cope with frequent stops but the motor buses couldn't.
Birmingham was never enthusiastic about trolleybuses and at the end became quite hostile toward them, an attitude that they took with them when they effectively became the West Midlands PTE and killed off the Walsall system - an act of sheer vandalism. 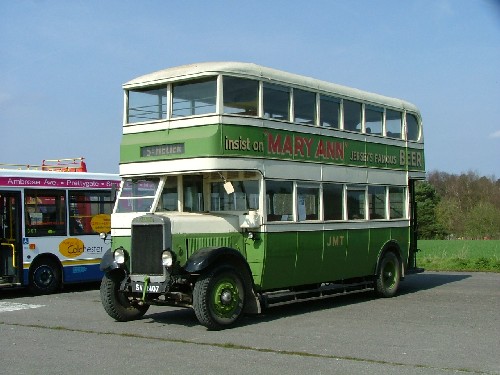 Unfortunately Birmingham's end came long before the preservation movement really got going. Only one ex-demonstrator survives and that was converted to a motorbus on leaving Birmingham (the body being put on a motorbus chassis, it is believed, though the original TBD1 chassis was a modified TD1 motorbus chassis), unlike most of the other demonstrators it was never painted in the city's livery. It is pictured here at Wisley Airfield in April 2005 at the Cobham Museum Rally. After conversion, it ran in Jersey for many years.

None of the city's own fleet survived, not even the unique EMB, which was years ahead of its time, having a low floor, level platform and fully enclosed staircase. Rumours abound that there is one of the original railless stuck in a back yard somewhere, but sadly these have never been substantiated. It wasn't uncommon for tram bodies to be purchased for use as summer houses or holiday homes and certainly at least two of Wolverhampton's 1923 trolleybuses ended up as such, so it is within the bounds of belief that one could have survived. However, it seems that it is very unlikely that any of them did.

Background is the Birmingham coat of arms.